“Her particular combination of entrepreneurial and creative flair are second to none. There is no one who works harder or does these things better. But in the end there is also her delicate artistry, the simple (or rather, definitely not so simple) act of conveying and bringing emotion to words and notes. And as the evening went on, one could feel the audience becoming increasingly wrapped up in the power of the words, the stories, the emotion.” London Jazz

“Mancio at the height of her appreciable powers, with tempos perfectly chosen, phrasing that served to heighten the song’s narrative, and an ever deepening expressive range. There was a palpable sense, too, of a genuine musical conversation unfolding and the joy of discovering new interpretative approaches.”  Jazzwise

“Georgia is sweet-voiced, but not cloying; and despite the bite of some of her lyrics (and the subjects which inspired some of them), she does not strain or go in for showy effects. The talent, effort and control were obvious, but so too was the fact that they were all in the service of the music”  The Whitman Review

“Georgia has one of the most appealing voices on the international scene, in my view. Her delivery is mellow, never over-stated, and yet her vocal expression effortlessly conveys so much emotion”  LondonJazz

“Mancio’s voice is quite unique; calm and understated, the essence of cool yet possessed of an inner warmth which draws an audience in by its pure musicality”  LondonJazz

“a triumph of integrity and classy musicality”  The Guardian 4****

“the immaculate Mancio in collaboration with the brilliant pianist, composer and arranger, Kate Williams… presented an emotionally-charged set of originals”  Jazz Views

“What an amazing, vibrant and completely sold out Ronnie Scott’s last Monday week ….A wonderful night of jazz for grown-ups … which ended with that kind of applause that made you feel that you had been in on something special”  LondonJazz

“unequivocally, one of the gigs of the year…Heartfelt, intimate and engaging, this was one of those memorable nights where the music-making was completely transporting. Every lover of song will want to add Mancio and Broadbent’s tour de force to their collection”  Jazzwise

“this was Rodgers and Hart, George and Ira, Berlin, Porter, Jerome Kern and Dorothy Fields born again in a different century. It didn’t, it couldn’t, get any better than this…” Bebop Spoken Here

“The material had an elegiac quality…If you love the golden age of the American Songbook, you’ll appreciate the achievement of this partnership in extending it.” Jazz Journal

“It is almost like hubris, when Alan Broadbent & Georgia Mancio also call their album “songbook”. In the KulturForum .. it became clear that the pianist and singer indeed set new standards.” Kieler Nachrichten

“Songbook…is not reminiscent of the “Great American Songbook” –  the famous collection of jazz standards. Because here new standards are set”  Hansen-Munk

“The songs, with their fresh, and wonderfully clearly delivered Mancio lyrics, have charm and character, and are always reminiscent of, yet different from, other points from the canon…Mancio sings this repertoire with clarity and integrity”  London Jazz

“These were songs of real beauty and sophistication, that surely deserve to join the Standards repertoire – arranged, played and sung with great passion and skill”  LondonJazz

“Georgia Mancio and Alan Broadbent …. demonstrated at the 2013 London Jazz Festival that their musicianship was perfectly matched – both have a finely worked and effortlessly expressive emotional precision – and have just recorded their collection of new songs, to be released next year. …. Mancio was in excellent form…her ability to vary her expressive weight and steer her tone between extremes of feeling without ever becoming harsh was exquisite…..This is music that builds a tradition up rather than tearing it down, and for an audience that enjoys craft, delicacy, and sublime musical skill, it was entrancing. … A new songbook, beautifully delivered: that’s surely worth waiting 50 years for” Arts Desk

“She is one of the great voices of the contemporary British jazz scene having both outstanding technical ability and great warmth as a singer….Throughout the evening Georgia gave a bravura performance combining vocal dexterity and inventiveness with richness and smoothness that had the audience rapt from start to finish.”  The Peoples Publications

“Hide Me From The Moonlight, a mystically romantic original number was incredibly well received by the audience, which bodes well for the Broadbent/Mancio collaboration…..the delicate perfection of Broadbent’s accompanying craft, Mancio’s unfailing ability to shape a long phrase….these new songs definitely deserve to be heard”  London Jazz

“One of the great pleasures of ReVoice! is hearing Mancio perform in duo with some of the UK’s finest musicians.  This year saw some wonderfully inventive pairings with bassist Mike Janisch (including an exquisite reading of ‘My Ship’) and an ever-inventive Gareth Lockrane…Best of all was Mancio’s poignant lyrics to Zawinul’s ‘Midnight Mood’ with pianist David Newton.  Eloquent, elegiac and intensely moving, I’ve never heard Mancio sing it more beautifully.”  Jazzwise 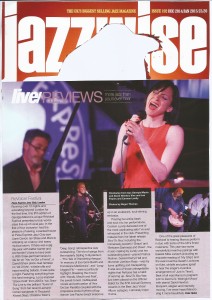 “Another thing to be valued is that Georgia Mancio has created a good listening audience at these gigs. The sets she does at the opening of each concert definitely help to set the tone, to prepare the ground for the headliners. She has also progressed in assuredness, confidence and range as a singer. It’s all positive: the broader responsibilities of running an increasingly complex festival venture seem to reflect back into the scale and aura as a performer, and maybe vice versa too.”  London Jazz News

“Georgia Mancio … gave a debut of her and [pianist Tom] Cawley’s original work, which in its naturalism, psychological subtlety and domestic focus, was everything [Sandra] Nkaké’s wasn’t. There were a couple of perfectly-pitched covers, but perhaps of most interest were Mancio’s own lyrics, which, very unusually for jazz songs, take an interest in everyday life. … From the giddiest spectacle to the most intimate human concern, this was a gig with everything to offer. A triumph of both programming and performance” The  Arts Desk

“her voice has taken on an extra resonance and conviction…. her control at the lower end of her range was spine-tingling… just a hint of a wraith-like reference to the great Anita O’Day, without the slightest attempt at simulation. Her  intonation was impeccable, her fluidity around the pulse and a feeling of real pleasure derived from her interaction with the other two musicians was just incredibly infectious.”  London Jazz

“[Mancio] surprised with a jazzy version of Bowie’s ‘Life on Mars’ with Seú Jorge’s Portuguese lyrics amid a solid performance of jazz standards. Her voice jumps … between deep and high notes with ease and joy” Jazzwise

“Curating, MC-ing and performing the opening set each night, Georgia herself was consistently beguiling across a huge range of material , from beautiful Jobim bossas to risk-taking vocalise to little known Chet Baker gems”  Jazzwise 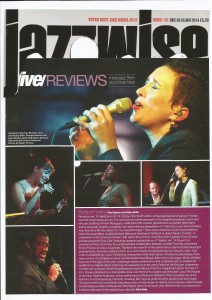 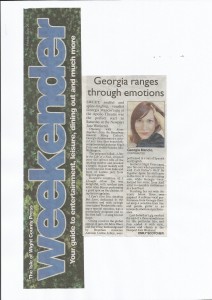 “From the impressively fluid phrasing of ‘Willow Weep For Me’ to the heartbreaking intimacy of Milton Nascimento’s ‘Travessia’, her sense of lyrical sweep thrills at every turn” Jazzwise 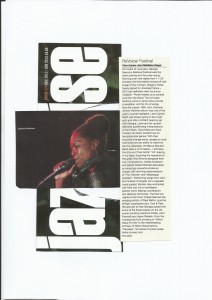 “Each night Mancio handles the opening set, accompanied expertly yesterday by bass-guitar virtuoso Laurence Cottle. No other instruments were needed as they sailed through the tricky Bud Powell (by Chick Corea), No More Blues (Jobim) and two British classics, Who Can I Turn To and Where is Love” Evening Standard 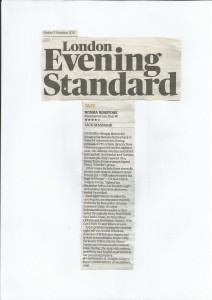 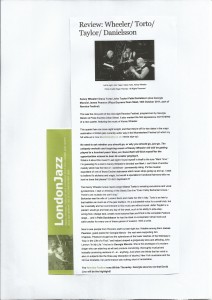 “a superb vocalist ….not afraid to experiment with arrangements and presentation”  All About Jazz

“a performer of character, conviction, and relaxed virtuosity … more than ready for [the spotlight]”   The Guardian **** 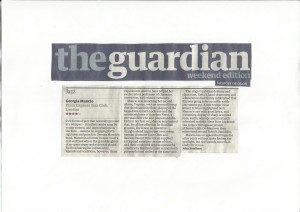 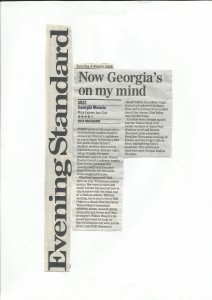