“This is one of the best jazz vocal albums I have heard in a long time…a winner”   Critics’ Choice Best of 2008 selection, Jazz Journal 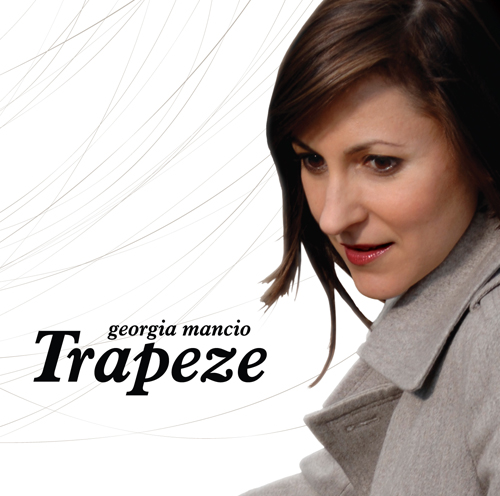 From English to Italian to Spanish to Brazilian Portuguese: a Rodgers and Hart standard rubbing shoulders with a Chilean folk song; a Cuban classic sitting alongside a show-tune; an Italian pop song nestled between two blues and three very different sambas paying homage to the great composers of Brazil past and present.

This is Trapeze, the follow-up to Georgia’s debut, Peaceful Place, and the culmination of two years’ live work with her band.

“Perhaps most impressive of all is her versatility across a range of settings.  The album jumps from Jobim/Moraes to Lionel Bart … to Stanley Turrentine… without ever once loosing its footing… gorgeously seductive.”  Jazzwise

“taste, originality and understated eloquence…..[the] album…displays those qualities in abundance and should put her well and truly on the map.”  The Observer

“The word has been out for a couple of years that Georgia is someone to watch out for and her new album shows why….Marvel at the way Mancio’s rhythmic grasp never fails her in such a variety of groove and swing.  She is, without question, the real thing.”  Jazz UK

“Remember the name because Georgia Mancio is just this side of a breakthrough into the mainstream. One Jonathan Ross show or a Later with Jools Holland, and she’ll be the talk of the town. Already a cult heroine on the jazz circuit…..she’s a versatile virtuoso!”  Sunday Mercury

“an airy, gossamer voice and a penchant for … unusual song choices… A lovely album”   The Scotsman

“ambitiously wide-ranging but coheres courtesy not only of the intelligence with which she deals with a lyric…but also of the sureness of her delivery and the cogency of the various songs’ arrangements.”  The Vortex