“These are bold, no-hiding-place expressions, and Mancio – as storyteller – possesses an innate adaptability, both in technique and artistry, to enhance the melodies and lyrics of these well-chosen pieces so naturally and so clearly, without the need for over-embellishment or showboating. And that’s classy” –  AP Reviews ***** 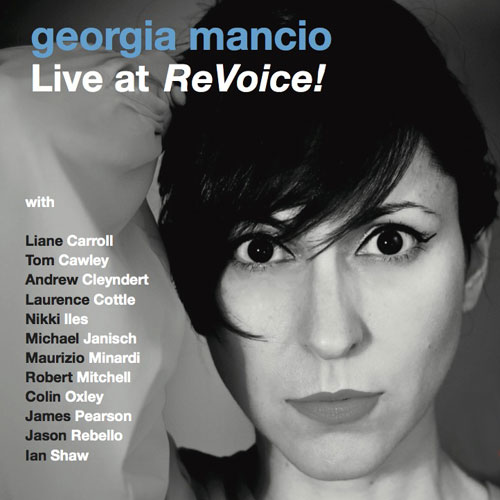 Georgia performs a collection of duos recorded live over 3 years at her own much celebrated international voice festival.

“The singer has a wide vocal range and she uses it extensively to provide plenty of variety of both sound and programming… [She] gets plenty of expression, meaning and emotion into all these tracks”  Jazz Journal ****

“Mancio is one of the UK’s most accomplished and imaginative vocalists who is capable of performing in a variety of musical styles as this album demonstrates….She thrives in the exposed, intimate musical situations in which she finds herself on this live album … [an] admirably diverse, often moving, often exciting album that offers a good insight into her versatile vocal talent”  The Jazz Mann ****

“From the magnificent, stentorian sound of Cleyndert’s bass on the opening bars of Sting’s haunting Fragile to Ian Shaw’s closing farewell at the end of the final track, David Bowie’s When I Live My Dream (all the more poignant in the light of his subsequent death) each and every one of Mancio’s duo collaborations holds the attention….So much good stuff here… this is, altogether, an excellent piece of work and a fitting record of tremendous endeavour”  London Jazz News

“The duet format leaves a lot of room for exploration, but also subjects a singer to even more exposure than normal. Georgia embraces the freedom …[and] the risk, choosing often quite slow tempi and avoiding obvious phrasing. She accomplishes it all in style, with the “omb” that is in aplomb but not in bombast.”  The Jazz Breakfast

“London-based singer shines of this fine compilation of live duo recordings….What helps to set this album apart from many of the jazz vocal albums we hear, is that Mancio clearly worked closely with each of the musicians involved to make these performances unique. Sting’s Fragile, for example, is stripped back to its bare bones, and performed as a duo with double bass player Andrew Cleyndert. Mancio’s gorgeous tone and subtle phrasing shines a fresh light on the lyrics, and helps us to hear the song in a new way…..Mancio is in fine voice throughout. The duo format leaves nowhere to hide, but she sounds confident and relaxed, with the occasional change in emphasis helping to put a fresh spin on certain lyrics. Her scatting is also clear and concise. Finally, it’s worth noting the album is beautifully recorded, and captures the singer and musicians to good effect. Highly recommended” Kind of Jazz ****

“This consummate, many-angled exploration of song brings together 12 fascinating duo performances….From the trenchantly individual reworking of ‘Fragile’ with bassist Andrew Cleyndert to the perfectly crafted beauty of ‘Willow Weep For Me’ with pianist Jason Rebello, Mancio seeks out the specifics in each song, drawing you into its narrative while simultaneously unveiling the emotional nuances within.”  Jazzwise ****

“A live album from golden-voiced Mancio…[which] both shows off her vocal chops and highlights the talents of a wealth of well-known accompanists. Covers of material by everyone from Carole King to Bowie are given new life, while jazz standard Just Friends is lifted by the sublime playing of pianist Robert Mitchell and a new original, Bendita, benefits from the connection between Mancio and her piano-playing co-writer, Tom Cawley.”  Evening Standard ****

“An ambitious artist, Mancio has built her career carefully, so that she now has everything covered – technical mastery, expressive range and a remarkable versatility. In the course of this set she handles jazz idioms such as scat and vocalese, standards, ballads…a beautiful song in Italian …and at one point she delivers a rather nifty passage of whistling.”   The Observer ****

“coolly expressive jazz singer with a refined technique who cherishes lyrics..  But if she can be improvisationally adventurous, she also appreciates the power of leaving a fine song alone.”   The Guardian ***

“A SONG isn’t truly a song until it reaches out and grabs your heart, with both singer and accompanist sharing the enjoyment and responsibility of sensitively breathing life into its particular character. Communication is all….What particularly stands out about this release is the raw, pared-down sincerity of the performances. Georgia Mancio shares the stage each time with a single guest instrumentalist – and rather than any sense of ‘anonymous accompanist’, there’s an enthralling synergy between them…These are bold, no-hiding-place expressions, and Mancio – as storyteller – possesses an innate adaptability, both in technique and artistry, to enhance the melodies and lyrics of these well-chosen pieces so naturally and so clearly, without the need for over-embellishment or showboating. And that’s classy…..Seasoned fans of ReVoice! will probably be itching to get their hands on this. For any other appreciator of beautifully-fashioned vocal jazz… equally, it’s a must.”  AP Reviews *****

“Classic jazz singing in abundance on this tasteful new live album….[Mancio] puts her stamp on the material that effortlessly slides through classic popular material to standards and to new songs [she] has co-written”  Marlbank ***1/2