Pianist and composer Kate Williams talks to Peter Vacher about her group Four Plus Three and the ensemble’s recent collaborations with award-winning vocalist Georgia Mancio, which have resulted in their new co-led album, Finding Home

Quietly, but with great determination, the pianist and composer, Kate Williams has amassed a distinctive body of work on record and gained wide-ranging praise for her live performances. Never histrionic yet always enthusiastic, she tackles improvisation with a rewarding mixture of exuberance and calm assurance: her compositions veer pleasingly away from the routine and her groups continue to arouse interest and appreciation. Already known for working with the likes of the late and much-lamented Bobby Wellins, Stan Sulzmann and Chris Biscoe, she calls her latest band Four Plus Three as it combines the Guastalla string quartet with her regular jazz trio. It is arguably her most daring departure to date.

Recent performances by this chamber-like combination have been augmented by the award-winning singer Georgia Mancio, this fortunate coming together now manifest in Finding Home, their new release on Williams’ own label, KWJazz. Snappily described as, “a collection of songs, old and newly co-written, arranged for trio, string quartet and voice”, it is undeniably impressive in its range and scope as well as a tribute to the musicianship of both leading performers and their cadre of accompanists. If it is Williams who has carried the album’s prime responsibility for arranging and composing for the distinctive strings and jazz line-up, it is Mancio’s beguiling presence and the songs she has created with Williams that help make this recording the standout that it is. Both women are immensely proud of what they have accomplished and rightly so.

Their co-ownership of the project clearly means a great deal to them both, as they explained mid-way through their Finding Home tour.  “Georgia and I have known each other for nearly 20 years and we’ve worked together in various settings,” Williams tells me. “A moment that stands out was back in 2009 when she asked if she could write lyrics to an instrumental tune of mine entitled ‘Silhouette’. It worked very well and became the title track for Georgia’s album the following year. I think we sowed the seeds for Finding Home at that point.” For her part, Georgia adds, “I was always impressed by Kate’s ability to consistently (and indefatigably!) create such imaginative and bespoke projects. Around 2009 I took my first steps as a lyricist, co-writing with pianist/composer Tim Lapthorn and receiving approval from Pat Metheny for a lyric to his ‘Question And Answer’. I was really struck by a piece of Kate’s and asked her if I could write lyrics to it. As she told you, it became the title-track of my album, bringing the collection of songs together with Kate’s two contrasting arrangements acting as bookends. That really planted the seed for Finding Home even though it’s taken a while for it to bloom.”

“When I formed Four Plus Three in 2016,” Kate continued, “It was always my intention to sometimes expand the line-up with various guests, so it seemed a very natural thing to ask Georgia to join us. But it was more than that really: Finding Home is truly a joint project. Most of the original songs were written quite organically together. It wasn’t a case of me composing music for Georgia’s words or vice versa. I would often send her a snippet of music, she would send some initial words, I’d write a bit more, etc. It was a very enlightening process. Because we’re good friends, it was easy to be honest with each other about which things did or didn’t work. I’ve found it to be a very different experience co-leading a project,” she reflected. “Georgia and I have both led bands of our own, but to fully collaborate has definitely broadened my outlook. It’s inevitable that having another person’s perspective from the start has made us both consider things we wouldn’t have thought of individually.”

For Mancio, Williams’ proximity was a plus compared with her long-distance connection with the celebrated US pianist Alan Broadbent. “I’ve worked with Alan for six years now, touring the UK, Europe and last year debuting together in the US,” she confirms. “We have co-written 26 songs and created our own Songbook. There is a natural stylistic empathy between us which gives me clarity and confidence when writing to his music. I always feel the words are there waiting for me and if I have to work too hard to find them, I’m probably on the wrong track.”

“Alan and I live on different continents,” Mancio emphasises, “whereas Kate and I are both based in London. We have been able to collaborate much more intensively and across all areas: co-writing and selecting other material, but also planning and booking tour dates, co-producing the album, co-directing the artwork, sharing the admin grief etc etc. We let the writing find its own course: sometimes we went back and forth. Though Kate has done all the brilliant arrangements, these also felt collaborative. It would have been very difficult to work in this way with someone less dedicated than Kate. We’re both perfectionists and give our all to deliver the best end result. It’s been fantastic to really share and be supported throughout the process.”

One noteworthy aspect to both the recording and to a number of Finding Home live performances has been the guest presence of Kate’s father, the celebrated classical guitarist John Williams. How had she persuaded him to join her in this project, I wondered? “If I thought he’d needed persuading, I wouldn’t have asked,” she laughed. “Briefly, back in 2016, Steve Rubie who has been a great supporter of Four Plus Three from its outset, asked if I’d be interested in doing a one-off gig at the 606 with John W guesting with the band. My dad said yes, obviously, and we did it in June 2017. I wrote a set of music for that night and one of the tunes ‘Slow Dawn’, prompted Georgia to ask if she could write lyrics and it became ‘We Walk’. It’s one of two tracks that feature him on Finding Home. We did one gig, now we’re doing a few more – great!”

Williams continues: “Any musician who has organised their own gigs or recordings will appreciate that it takes a lot of time and energy to co-ordinate everything. It’s been great with Finding Home to share not only the creative process, but also all the admin tasks.” Putting these more mundane factors to one side, I was intrigued to know more about Williams’ approach to writing for strings – surely something of a departure for her? “Listening to plenty of string music and briefly learning cello as a child – both these things have definitely helped. Writing for strings does have implications for the band dynamically but so far everything has worked well – that’s partly due to having great players, that’s the Guastalla Quartet as the ‘Four’ of the Four Plus Three who play brilliantly as a unit and with a massive sound, and to drummer David Ingamells who has a broad palette and can really maintain high energy at low volumes.”

And the challenge in writing for a vocalist? “Really to integrate the voice into the rest of the band without it becoming swamped or overwhelmed. Still it’s much easier to write for someone you know and I always had Georgia’s voice in mind while writing.”

Mancio has also learned much in the process: “We had only played a few dates before recording the album last year and now midway into our tour, there’s been a definite shift as we focus on the whole arc of the show and the continuity of the storytelling. Also, in pos-production, hearing the minutiae of what everyone is playing has deepened my relationship to the sum of which I’m a part. Globally and politically, we are in dark, divisive times and I’m more aware than ever of the importance of communication. I’m learning with every gig I do how to become a better communicator and a more complete and more truthful artist. It’s a privilege to do that alongside these great musicians.”

A vital element in the makeup of the album and crucial to its desire to reflect varied aspects of ‘home’ is the trilogy of pieces authored by Mancio to mirror her experiences as a volunteer in the ‘Jungle’ or unofficial refugee camp in Northern France during 2015-16. “When the camp was demolished, 10,000 people were displaced,” she says. “Among them were 2,000 unaccompanied children who were subjected to political point-scoring between the UK and French governments, neither of whom would accept responsibility for them. They were abandoned until the very end of the camp in makeshift shipping containers with no formal legal advice, traumatised as their various safeguards were dismantled and destroyed. This story grew into a trilogy of songs – ‘The Last Boy on Earth’, ‘Halfway’ and ‘We Walk’ – inspired by these child refugees that sits at the heart of the album and in which we sought to express the terror and the isolation, yes, but also the resilience and bravery of these young people and their incredible journeys. We are proudly partnering with Safe Passage on some of our tour dates. It’s a special charity dedicated to ensuring that refugee children with family in Britain have a safe and legal route to reunion.”

Kate adds some extra details: ” We decided early on that the theme of finding home should have many meanings. It’s a thread running through the entire album. Love, loss and hope and the natural world all figure. Strings are very versatile. ‘The Last Boy on Earth’, which has a powerful and harrowing set of lyrics inspired by the true story of a 14 years old boy stranded in the Calais refugee camp as it burned, has a section of free improvisation for strings and drums. It’s meant to have a bit of an apocalyptic quality. Whereas on something like ‘Play’, which has a slightly nostalgic quality, they play much more lyrically.”

When I ask what’s still to come, Williams answers: “this summer I’m doing some orchestral writing but, otherwise, I don’t really have a bucket list other than to keep working, learning and practising. I’ll keep you posted!” Mancio, as ever, a bundle of energy, has the third edition of her Hang season due in October, “along with more recording with Alan Broadbent and then a writing project with pianist/composer Tom Cawley, which has been brewing for some time. Beyond that my heart and mind are open!” 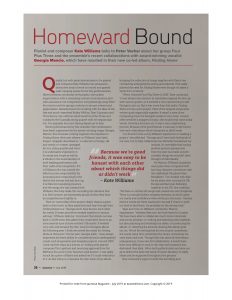