As the nights draw in and the leaves turn from green to golden hues, it can only mean one thing – the welcome return of the vocal extravaganza ReVoice! Peter Quinn spoke to dynamic festival curator and singer supreme Georgia Mancio about how reaching its fifth edition is all a collaborative passion for the music and finding the stars of tomorrow.

Now an essential part of the capital’s jazz calendar, this year marks the fifth birthday of Georgia Mancio’s acclaimed ReVoice! Festival. The landmark is all the more impressive given the festival’s rather shaky start. Entitled ‘Georgia Mancio Presents’, the first five-day edition didn’t do quite as well as anticipated in terms of audiences, and Mancio half expected Pizza Express Jazz Club music manager Ross Dines to say thanks, we gave it our best shot. “But he kind of did the opposite,” she notes, “and said I think it was the wrong time of year. He moved it to October and said let’s make it longer to generate more of a buzz.” This leap of faith resulted in an extended nine-day second edition of what we now know as ReVoice!

It also extends beyond London for the first time, taking in Dorking’s Watermill Jazz Club and The Hunter Club in Bury St Edmunds. “They’re about the people who run them and the people who go,” Mancio explains, “and the fantastic atmosphere they create. They’re so up for listening and engaging, and they’re so warm – like a wave of energy you get back.”

Of all the international artists that Georgia has programmed at ReVoice!, two in particular have stood out. “Jhelisa Anderson, because her performance skills were so immense. Something in me changed because of seeing her – she made me feel braver. She and Beady Belle, or Beate (Lech), both have it – they’re just so brave on stage, so totally immersed in the music, but in such an honest way. They’re both fantastic singers, but I think it was as much the performance. Everything was so well executed but it didn’t seem contrived in any way. The other thing about Beate were the levels, the gears that she had. I don’t think I’ve seen anyone do that – she just kept pulling out more and more expertise.

We all talk about jazz and why there is not more of an audience for it. Well I think that’s a lot to do with it, the performance – the way it’s presented and the way you put it across with confidence and really believe in it.”

And let’s not forget that ReVoice! provided the great Gregory Porter with one of his first UK bookings in 2011. “The momentum was building, ” Mancio says. “He’d done Jamie Cullum and Jools Holland before ReVoice! and by the end of that year there was already a massive buzz. It’s amazing, he’s doing the Royal Albert Hall and I saw his CD in my local supermarket yesterday, and that’s only in four years.” And what are her abiding memories of his performance? “It was the fact that he was doing original material – he made those songs sound like classics – and his lyric writing, which is just beautiful. It gives you hope: people do want good quality music.”

The festival also gives Mancio the opportunity to perform in duo with some of the UK’s finest musicians, and there have been some wonderfully inventive pairings over the past four years. But which has been the most memorable for Mancio? “Robert Mitchell, because we’d never played together, there was no history at all. Even just finding the material can be a challenge. Robert cared so much about the process and brought so much to it. And the Liane Carroll night: when you play with another singer, and the same with Ian (Shaw), they’re so supportive because they know what you want to hear in that voicing and they’re more likely to guess how you’re going to phrase something.”

As for future plans, watch out for a ReVoice! CD, a possible ReVoice! tour, plus an idea to bring in spoken word and even circus elements. “It’s not just about the voice then,” Mancio says. “It’s not just ‘re’ as in ‘about’ but how you can revoice something and present it in a different way.”

For more info go to www.revoicefestival.com 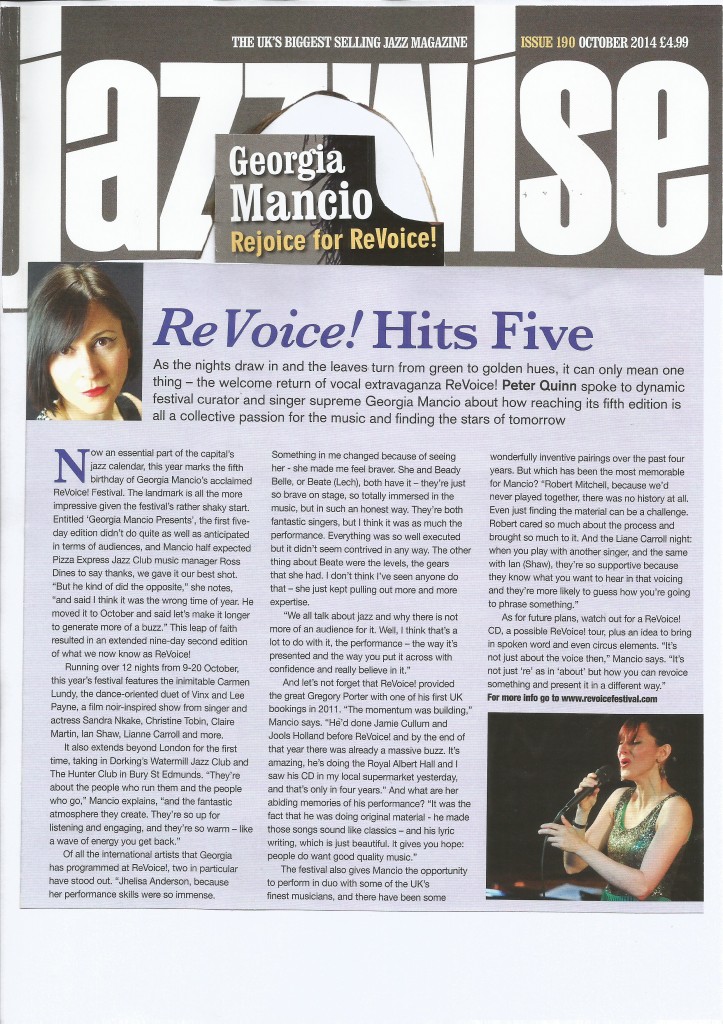